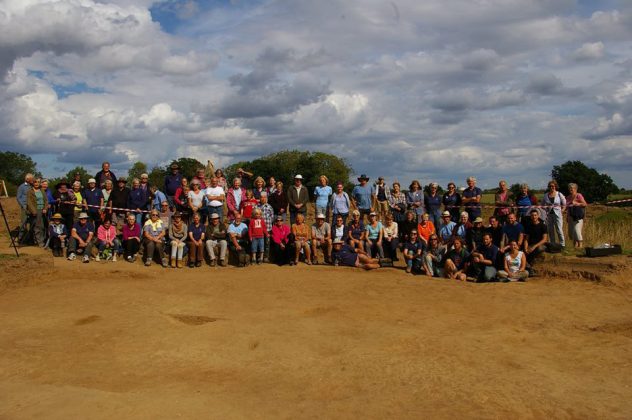 Have you ever looked in your back yard for a Roman?

In 2014 Mr Peter Purdy asked Britannia archaeology to conduct a Geophysical survey of his back garden to look for just that! He said "I believe that there was a Roman farmstead in my back yard."
As part of our project to find out more about Roman Aylsham we went to Aylsham Heritage Centre to learn a bit more about the dig at Woodgate Nursery on Cawston Road.
At the Heritage centre, we firstly scrubbed some ancient artifacts straight from the dig. We had to clean the mud and dirt from each piece with a toothbrush. Then we had to weigh and measure each piece and record it on a spreadsheet, just like the volunteers at the Roman dig have to do. Some people found CBM (ceramic building material) others found parts of bone a Victorian smoking pipe, and parts of a Roman roof tile possibly printed by a deer which could have trodden on the tile whilst it was out drying.

Did you know that pottery and kilns is one of the main things that have been found?

Lots of pottery has been found on the site. The oldest bit of pottery the Aylsham Roman Project have found was made in 2000 B.C.  Pottery was for use at Woodgate and it was not for trade. It was used to carry things like oil and water to places. ​Some of the pottery that was discovered were very decorative. The Romans  would use stick tools and their very own hands to carve and make patterns on pottery. The pottery was made in a kiln which - if you don't know what a kiln is -  is a little dome with a grill and a fire underneath it. Pottery was put in it to dry it and make it solid. The Aylsham Roman dig have found two kilns and one of the kilns was full of wasters (which means fallen or damaged pottery.) One of the kilns has been found well preserved with the floor still in one piece.  At Woodgate Nursery the roman dig crew are making a replica of a Roman kiln to find out how exactly it worked.
After cleaning lots of the tiles, the volunteers at the dig also found evidence of animal foot prints in some of the tiles like: dog cat, otter,  deer,  mice,  fox,  newts,  lynx and pine martens.  Human fingers prints have also been found. That tells us that the tiles were possibly left out to dry and different animals walked over them while they were left outside. It also shows that there was a water source near by as many of these animals like to live near water.

In June 2018 a year 5 student named Daniel Ambrose found the first ever part of mosaic uncovered at Woodgate. This was a tiny piece of flooring called tesserae. A mosaic is a little part of tile which made a big picture on the floor. Some told a story some didn't. These can be very decorative.   ​
Aylsham's Roman project in Norfolk was voted the best community archaeology project in Britain. Isn't it so fascinating that Marsham is the closest Roman camp to the farmstead. The people in the farmstead are believed to have been Romanised which means people who bought Roman objects and lived a Roman life. There are so many things that were found in Aylsham. just imagine that people lived here!
​
It seems that Peter did find a Roman in his garden .... or at least where he lived!!

We would like to say a thank you to Peter Purdy and Jayne Andrew. 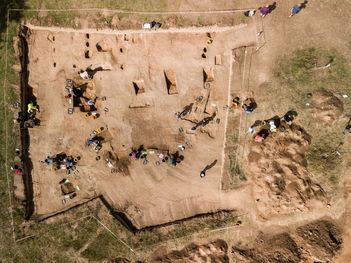 Part of the Roman Dig Site at Woodgate
​
Visit the Aylsham Roman Project website to find out more.

What year did the dig start?
A. 2017.
B. 2014
C. 2010
When was the oldest piece of pottery that has been found at the Roman dig made?
A. 2000 BC
B. 2500 BC
C. 3000 BC
What is a waster?
A. A piece of pottery
B. A broken piece of pottery
C. A fallen in Kiln
Which of these animal footprints were found on the tiles?
A. A Bear
B. A Lynx
C. An Eagle
What is the name of the Emperor on the penny?
A. Elagabalus
B. Julius Caesar
C. Edward III
What is the oldest artefact that has been found?
a. Edward III penny
B. Sea Anemone fossil.
C. Palaeolithic Flint
Where was the closest Roman Camp?
A. Caister
B. Norwich
C. Marsham
What was the biggest artefact found?
A. A Kiln
B. A shield
C. A flint